Some of your might know that I’ve been putting some work in FluffOS v2019 lately, adding some long craven features to it (full UTF8 support, yay), and also, I want to make it easier to development and experiment with.

That’s why today I am posting the current steps to build and play with fluffos on OSX and Mingw64.

For OSX:
Thanks to github, fluffOS now has OSX CI that will check all commits, this is also where you want to look on how to build the driver if the information here is outdated:

Basically, in order to build FluffOS under OSX, you need to install https://brew.sh/ first.

Then you would want to install all the libraries you need

One caveat is that Homebrew don’t install openssl into the usual places, so you need extra ENV param when doing cmake

Find your OSX binary at build/bin !

So, Github Actions doesn’t come with MSYS2 by default yet, so we haven’t add an CI, keep an eye out though.

First, you need to install MSYS2, from offical website here , pick X86_64 version if you are on 64 bit windows, i686 if you are on 32bit. (Note that it doesn’t matter what you compile into, FluffOS LPC VM is always 64bit! The only difference is that you can’t use more than 4G memory in 32bit.)

Next, you need to open msys2.exe and sync and update MSYS2 with pacman. Do

and you might need to close msys window and reopen, keep running that command until there is nothing to upgrade anymore. 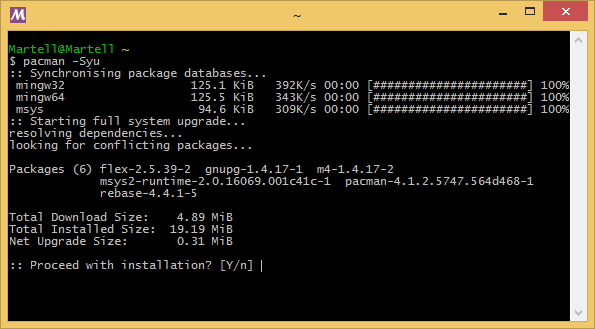 Secondly, you want to install mingw64 devtoolchain, do this

Once this is over, remember to close MSYS2 window, find MINGW64.exe in the same directory and open that instead. Very Important!

If you want PACKAGE_DB=ON , install additonal mysql package with

Or if you want sqlite3

Remember both platform are experimental right now (For example, eval limit timer won’t trigger), especially on Windows, so report any bug you might have seen!

I got the result as below:
CMake Error: The source directory “C:/msys64/home/Kam” does not appear to contain CMakeLists.txt.
Specify --help for usage, or press the help button on the CMake GUI.

any step I miss or wrong?

I got the result as below:
CMake Error: The source directory “C:/msys64/home/Kam” does not appear to contain CMakeLists.txt.
Specify --help for usage, or press the help button on the CMake GUI.

any step I miss or wrong?

Yeah, you still need to run

Note that you need to create another build directory, and run cmake command in that directory with reference of the source directory (you maybe adding … before)

Thanks, I was finally able to compile on Windows with this instructions adding
mingw-w64-x86_64-cmake
to the list of pacman packages.

Note, it seems that you need to install mingw- packages or things get messed up, e.g. don’t install cmake, install mingw-w64-x86_64-cmake.

Congrats! Let me know if you have any more issues

Everything works fine if I build with -DPACKAGE_DB=OFF
However, if I leave this option out to try and build with MySQL, the cmake step completes without error but “make install” fails at

I’m using mysql-connector-c-6.1.11-winx64 for the MySQL include and lib files.

Are there any hints for quick partial building and running with a debugger?

You need to see what was outputed when you run cmake . especially the mysql part.

For now, under windows, to compile you need to install mysql-connector under c:\mysql (that is what cmake output will tell you if it finds it or not).

Actually, it doesn’t appear this has anything to do with Mysql errors. make sure you run pacman -Syuu to upgrade everything and retry. Some time latest GCC upgrade could have issue compiling

Thanks, still no luck. There were two mysqlclient.lib files in the mysql-connector-c-6.1.11-winx64.msi install. One in vs12 and the other in vs14. I tried both with cmake finishing without error but make install giving the same error building main_lpcc.cc.obj.

I see some posts suggesting that mysql-connector needs to be built from source for the mingw64 environment. I tried to do so but have yet been unable to.

it means GCC is having trouble linking the final library. There could be myriad reasons, but mostly you should make sure to reinstall/update GCC first , check if you have enough memory available memory (usually you need at least 4G free memory)

You could also -DMARCH_NATIVE=OFF to get an generic binary instead if you want to copy it to run on another machine.

If nothing works, you actually don’t need lpcc to run things. just make sure you have driver binary in bin/ and you are good.

The solution being that under windows we just need to use
pacman -S mingw-w64-x86_64-libmariadbclient and the driver will automatically work.